Four teams that could use Michael Oher to protect their Blindside 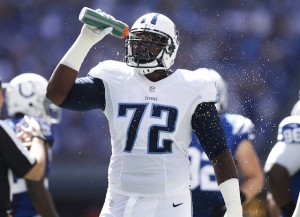 Michael Oher who is famous for the movie Blindside is available for teams to pick him up after being released this week by the Tennessee Titans.  While Oher battled a few injuries this year, he is still a very solid offensive lineman.  Oher played with the Ravens for 5 seasons winning a Super Bowl at tackle.  He will be 29 at the start of the new season, and could be a very solid blindside tackle for a team.  Here are four teams that we think could express interest in Oher.

Pro Football Focus, a football analytic site, graded him as the 75th tackle out of 84 in the league, which is not great, but he could be an upgrade for these squads.

Carolina Panthers – Panthers tackles Byron Bell (83rd) and Nate Chandler (68th) are decent but they are not the best tackles in the league.  Oher would be a major improvement over Bell.  It could also give Cam Newton more time.

Denver Broncos – The Broncos had major issues all across their offensive line in 2014. One of their biggest weaknesses was at right tackle, where they were forced to slide All-Pro right guard Louis Vasquez outside and out of his comfort zone. Michael Oher’s natural position is right tackle, and when he’s healthy, he’s one of the best in the business.

Washington Redskins – The Redskins have one of the best left tackles in the game in Trent Williams, but they are far from settled at the right tackle position. Neither Tyler Polumbus nor Tom Compton, the incumbents, appear to be a long-term fix at the position, and a healthy Oher would be an upgrade over both.
Chicago Bears – A lot of the Bears’ offensive struggles in recent years have revolved around poor offensive line play. Jordan Mills has flashed signs of being a pretty good right tackle in the NFL, but he is still far from being a Pro Bowl-caliber player.
I could see others try to pick up Oher, but these four teams make the most sense to me.
Related Topicsbeats headphonesbeats headsetbose nflNFLnfl beatsnfl bose speakersNFL Colin KaepernickNFL DraftNFL newsnfl news and notesnfl rumors