Falcons would like to keep Sean Weatherspoon; Parties negotiating a new deal 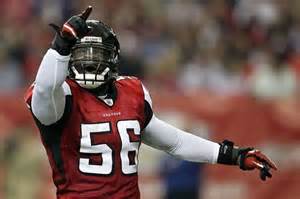 The Atlanta Falcons have been cutting players left and right, but according to Ian Rapoport of NFL Media, the Falcons are in negotiations with the former first round pick from Missouri.

Yesterday Vaughn McClure of ESPN, talked to Dan Quinn about Weatherspoon, and the defense mind said Weatherspoon is a guy they definitely want back with the team.

“With him, it’s that toughness and the speed that he can play with so, yes, definitely someone that we’re talking to,” Quinn said Friday, per Vaughn McClure of ESPN.com. “I know he’s got that kind of attitude. And you know me, just from watching our style of defense, it’s fast and physical. And that’s what Sean is. So, we’re certainly hoping that he can be a big part of it moving forward.”