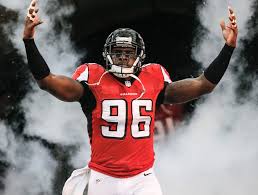 Yesterday the Atlanta Falcons went on a cutting spree, freeing up money for 2015.  They released Steven Jackson, Justin Blalock, Harry Douglas and Jonathan Massaquoi.  Massaquoi was the last to get released. Massaquoi, was once a promising prospect, who played at Troy University.  He was a selected by the Falcons in the fifth round (164th overall) of the 2012 NFL draft.

He played in 39 games with seven starts and had 60 tackles (42 solo), six sacks, and had two batted passes. Waiving Massaquoi only saved the Falcons $660,000 against the cap, but after all their releases they saved a ton of money.