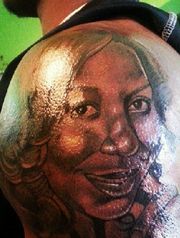 Miami Hurricanes running back Duke Johnson had a overcome some struggles with his mother supporting him as a correctional officer and a worker at Pizza Hut while he grew up, but those struggles will always remain with Duke. Duke has always been super thankful for his mother.  Well Duke surprised his Mother on July 4th with a tattoo of her on his shoulder. Cassandra Mitchell his mother was blown away when he showed up with a tattoo of her.

Johnson, who will try to prove his worth as the best running back in the 2015 draft at this week’s NFL combine in Indianapolis, said the tattoo is a tribute to the woman who raised him, the hardship they survived and everything she sacrificed to make his football dream come true.

This week Duke will do his best to make his mama proud.