I was playing lacrosse at Siena College until my love for football came knocking. I decided I would regret not pursing my passion for football down the line if I did not make a move, and because Siena did not have a football program that meant moving onto another school. After getting my release from Siena I was able to pursue some of the schools that had contacted me out of high school. I reached out to Fordham, one of the schools that initially recruited me, and they were in the middle of a coaching change. One of the coaches they were considering was Fordham alum Cory Bailey who was the head coach at Assumption College at the time. Fordham told me they were leaning towards Coach Bailey so I reached out to him and he had agreed to take me along with him if he got the job at Fordham. Coach Bailey’s loyalty drew me in and I knew I had a coach I could rely on. Coach Bailey did not end up getting the job but he offered me a scholarship to come to Assumption College and I happily accepted.

My mother. Words cannot describe how strong she is. She had me young and raised me by herself with help from my grandparents. Knowing how hard she worked in order to support us and what she had to go through to get where she is helps me get through helps me get through any tough situation I find myself in. There is no one I am more proud of than my mom.

All the scouts I have talked to, love my combination of size, speed, and athleticism:
“There are plenty of talented long snappers out there that are very good at what they do, but in order to make it to the next level you can’t just be someone who throws the ball between their legs, you have to be able to block the best athletes in the world, as well as cover down field with the intentions of tackling an even better athlete, and I am fully confident you can handle those responsibilities” -AFC North Scout
They also touched on the fact that they enjoy my “versatility” because I was not just a Long Snapper. My lacrosse background combined with my defensive end and tight end experience have helped mold me into an intriguing and realistic prospect that could fill in for multiple roles on a team if, God forbid, something happens to the guys they have you would be able to fill in as a fullback, tight end, outside linebacker, etc. – Former NFC South special teams coach

Lacrosse, Basketball, Baseball, my parents liked to keep me busy. 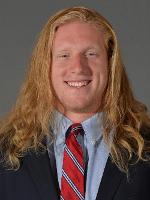 Tendencies. 1St, 2nd, 3rd, 4th, quarter tendencies. When does a team send pressure and when does a team want to set up a return. If a team does send pressure, does it come from the outside or up the middle? And if there is a return is it a wall or do they send a few loopers? Film study happens throughout the entire week but a majority happens Sunday after the Saturday game so that when Monday comes around you can see the looks and are already used to it.

Teammate Scotty Simonson who now plays tight end for the Oakland Raiders. I had the pleasure of going against him everyday which was awesome because it made me such a better player. There are very few people in division II that play against any NFL talent at all never mind go against him every single day for years.

Rob Ninkovich from a defensive end perspective, but from a Long snapper perspective I like watching Matt Overton for the Colts but I don’t think I play the same way he does. There aren’t many snappers in the league that make in impact on a game. I will. During the season I had two forced fumbles as a snapper covering down field and I plan on continuing that trend.

I got into a fight in high school. The kid was older and hit a girl at a party and growing up with a mother who was a victim of spousal abuse it hit a hot button. Sparing the details it showed me that I am not perfect, and that I need to control my emotions no matter the circumstances. It also showed me that there are many ways to fix a problem, and violence ,is not one of those ways. I am proud that I stood up for the girl because I felt I was standing up for my mom when I previously could not but I was and still am embarrassed at the way I chose to “solve” the problem.
I overcame this problem by attending individual and group therapy. Which positively influenced me so much I chose to study psychology in college. I also got involved in coaching, mentoring, and tutoring kids in marshfield, at the Nativity School in Worcester, and being an active member of Team IMPACT. I wanted give back and to make sure that anyone I could help didn’t make the same mistake I did. Although I can’t change the past I am doing everything I can to positively impact as many children I can to ensure they understand how to properly handle any situation they may be facing.

Just a lot of stretching. I’ll listen to some softer music on pandora and then amp it up prior to kick off with some Eminem.

My athleticism which you either have or you don’t, coach-ability and what I mean by that is my ability to not only take criticism but apply and try new techniques that will better me as an athlete, determination and persistence which I get from years of watching my mom work her butt off in order to get to where she wants to be.

Coming from a small school is hard enough, but being a specialist on top of that makes it even harder. I would say my lack of exposure is my biggest weakness.

Growing up in Massachusetts it’s no surprise that I would be a Patriots fan. Why does that matter? I have grown up understanding that it takes a team effort to win championships. You, as an individual, have a job to do and so does your brother on the left, and your brother on the right. And if everyone does their job as a team then you start winning championships. I’m not only a player that will do his job, but will lead the locker room towards this mentality.

Jerome Bettis was my favorite to watch. The way he ran was fun to watch because he wasn’t the fastest guy on the field but that didn’t bother him he was going to run right over you on his way to the end zone.

The Patriots were my favorite team growing up. I was in middle school during their three out of four year run and remember attending a parade thinking I want to be on one of those boats some day.

Mark Cuban, Robert Herjavec, and Barbara Corcoran who are all on the show Shark Tank. The information and stories they would have would be something I could take with me for the rest of my life. Neither of these people were born into money they worked for it. They know what it is like to be a lower/middle class person as well as being a high class person, and they have been told no before and they kept pushing. They are successful people and if you want to be successful you surround yourself with successful people, and hey maybe I would be able to land a job.