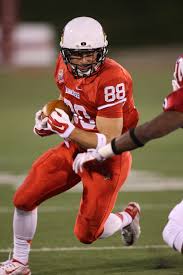 Great academics, perfect distance from home, great history of successful preferred walk-ons, and all of the faculty I met with said they felt something special was going to happen with the football program (which it did, as we won the MVFC this year and were runner-ups in the National Championship)

My Dad, who has been a great example for me of who I should strive to be as both a man, and as a father

No, I have no met with any scouts yet

Yes; I played soccer, basketball, baseball, ran track, did some gymnastics, and swam 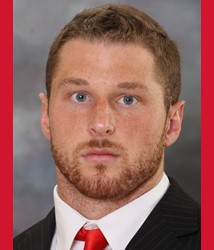 Yes, I have played strong safety, quarterback, kicker, punter, and been a kick/punt returner

I have a thicker build that allows me to break more tackles and be durable over the middle, and have a ton of experience playing both outside and slot receiver in three different offenses during my college career, which has made me a versatile route runner. I was expected to know all four receiver positions in our offense and was one of the only receivers in our system that could be plugged in anywhere and play without missing an assignment or playing slow out of uncertainty.

The first thing I do when watching film is watch a game or two straight through just to get an overall impression of the secondary and linebackers and what kind of schemes and general tendencies they have as a group. Then I really begin to break down each DB by studying their eye discipline in coverage, press tendencies and techniques, ball skills at the point of the catch, and what releases, moves, and routes really worked against that particular DB. I like to look for breakdowns in their coverage; if they are slow to react to certain routes and whether that slowness is due to their break technique or just having lesser speed, if have a tendency to bite hard against particular moves and sticks within a route, or if they lack discipline within a coverage and you can lose them easily on intermediate and deep routes. I also like to look for what kind of player they are in the run game; whether they just try to run around you to make a tackle or if they are going to put their helmet on you and try to run through you to the tackle point.

I thought UNI’s Makinton Dorleant and Deiondre Hall were both extremely good players when we played them the first time around this past season and lost. They were taller, physical and moved very well in coverage for their size.

I would say Julian Edelman, just because I can play both outside and in the slot, and I’m a gritty receiver willing to make the tough catch over the middle, or can split out wide and run intermediate or deep routes and still get behind the secondary.

My biggest obstacle was overcoming the stigma of being a preferred walk-on, and not being on scholarship. I had a very successful high school career and when that didn’t materialize into scholarship offers, I began to doubt my abilities and I carried that mentality into my first couple of years at ISU. When I finally let go of that baggage, I started to make plays and do things that I hadn’t done since high school, and I really got over the hump and launched myself into a contributing role for my final years at ISU.

Besides listening to music and getting ready in a particular order, the two things that I always have to do in my pre-warm up routine is catch passes from our redshirt quarterback Jake Kolbe, and I have to catch a throw from one of the corners, Tyler Lovgren while I’m running a warm up lap around the field.

My strengths are my build that allows me to be durable over the middle and break more tackles, I have very deceptive speed, and I have a lot of experience running a wide variety of routes, since I played both wide and slot receiver in three different offenses in my college career. Because of these changes I experienced, I am also a very quick learner and have a lot of football IQ.

My weaknesses are that my vertical jump is average for my position and that I am not as agile as most conventional slot receivers typically are.

I am a team-first, versatile player with the capabilities to contribute at any receiver position and on any special teams, and will learn very quickly how to contribute successfully wherever I am put. I have a humble beginning to my college career and because of that, I have a work ethic and desire to succeed, that very few can match.

I really enjoyed watching Wes Welker play in Tom Brady’s system when I was younger, just because it showed me that undersized receivers could play at an elite level, but my team has been and always will Da Chicago Bears, and my favorite Bear to watch was Devin Hester because of how electrifying he was whenever he was back on a kick or punt return.