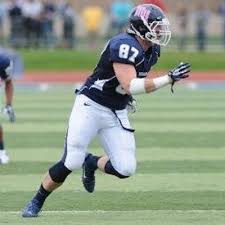 A handful of FCS schools and Division 2 Schools but no offers…went from a preferred walk-on at Monmouth to a scholarship player, starter, and team captain.

It felt like a family feel with both the players and coaches. Plus it was an opportunity to come to a program and play at the Division 1 Level and help the program grow and continue being successful. Overall, Monmouth just felt like the right place for me both in school and athletics.

I am from Souderton, PA, outside of Philadelphia.

My Pop Pop because he is someone who is always there for me or anyone when needed. Someone that always puts others first while continuing to be one of the strongest men I know. No matter what, he is someone that has been to every one of my games and my biggest supporter.

Have not met with any scouts specifically, just briefly talked when they visited school. 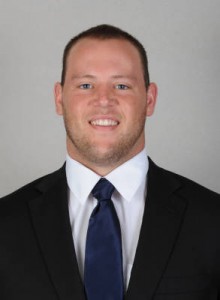 I played Tight End, Full Back, and Outside Linebacker.

I play with a great motor and leverage. I am quick off the ball and will keep going until the whistle blows. I am someone who uses my fundamentals to separate me from others while continuing to work and play as hard as possible.

When I first look at film I look at the formations of the Offense to get an idea of the types of plays they run out of their different formations. After that I look at play call tendencies based on down and distance. Finally and probably most important, I look at the Offensive Tackle I will be playing…looking at their overall stance, there lean on runs, how they kickback in pass, and some of the problems they have when facing different moves.

Connor Barwin is someone I would compare myself to because of his relentless motor both in the pass and run. He also uses his speed and leverage to beat his tackles on the pass while his athleticism to drop in space.

The biggest obstacle had to be when I did not receive any scholarship offers to play college football at the Division 1 level. Having that was something that really made me evaluate continuing to play this game and if it is something I could do. Obviously this obstacle has turned into my biggest motivation and fuel that I still continue to use to this day. Striving to prove those doubters wrong.

Yes, I would go to my Strength & Conditioning Coach before every game to get a workout and stretch in to get the blood flowing. I also listen to music and question and to myself to mentally prepare for the game.

My biggest strength would be my knowledge of the game and my ability to play both the pass and the run. My ability to understand the flow of the game, while using my skills to play the different blocks I face is a definite strength of mine. By working hard and going 110% every play is something I pride myself with.

My biggest weakness would be my ability to drop back into coverage simply because it is not something that was a part of our defensive scheme. I feel though that this weakness is becoming a strength of mine as I continue to train and work on it each day.

I would tell the GM that you are not going to find someone who will work harder and enjoy coming to work each and every day like me. I am someone who is athletic enough to play multiple positions. I also am someone who has started on all the special teams in college and is something I am willing to do to help the team. Overall, I am someone who is a student of the game and work hard to improve myself and teammates every time I step onto the field both in practice and games.

I would have dinner with my Pop Pop, Michael Jordan, and Reggie White. I would choose my Pop Pop because listening and being able to be with him is always a good time and lesson learned. Michael Jordan because of his competitive playing ability and winning. To have the chance to talk with one of the greatest competitors and ask questions could only beneficial. Finally Reggie White because he is one of the greatest Defensive Ends to ever play the game and the amount of information I could learn and pick from his brain would be endless.