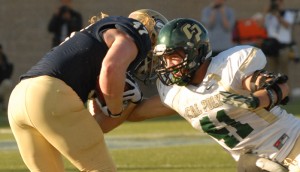 Probably around 5 to 7 serious schools

My father went to Cal Poly and my grandparents retired in the area. I grew up going up there and I always loved Cal Poly and its college town. I also wanted to be a 4 year starter while playing college football.

My father is my role model. Ever since I started playing sports with hockey he instilled the work ethic and attitude that I carry with me in everything that I do.

A lot of scouts came to my campus during the season to watch film and get background info. I have not met with any teams after my senior season has ended.

I grew up playing just about every sport a kid could play up until high school. The first sport I ever played was hockey. I continued to play travel ice hockey all the way up until college when I decided to stick with football through college. I also wrestled in high school.

In college I played every linebacker position. In high school I played linebacker as well as tight end and full back.

My instincts, my toughness, my motor, and my ability to run a defense.

When I break down film I typically watch a full game of my opponent without pausing or rewinding. After I watch the full game I will go back and start to break it down. I start with the formations and personnel to eliminate plays. After I can eliminate plays I break down the film further by looking at tendencies, splits, and checks. After all of that is done and I have a good hand on what the other teams offense is going to run I can focus on the type of offensive lineman that I will be facing.

The center from Colorado State that was drafted last year was a good player to go up against.

Luke Kuechly, he is such a productive player with a tremendous motor that plays from sideline to sideline.

I was a late bloomer in high school. I wasn’t a 6 foot freshman that weighed 200 pounds. It wasn’t until my late junior year that I finally grew and was able to reach my full potential. I was always smaller whether it was in ice hockey or football but it probably had a huge impact on why I am the player I am today.

I don’t have much of a pre game ritual but every home game my parents would come to my house a cook a huge breakfast for my roommates and myself before our game later that day.

My biggest weakness on the field is trying to do too much at times. It wouldn’t be because I didn’t trust my teammates but my mind set is to be in on every single play and to make sure that the entire offense I went against remembered my name and my number.

All I need is an opportunity. My work ethic, my motor, and my toughness wont let me fail or disappoint. If you give me an opportunity your going to get a guy who loves the game of football, has never had any off the field problems, and someone who will do whatever it takes to get the job done. I’m going to make it hard for you to cut me. My football smarts, my instincts, my leadership, and my work ethic will earn me a spot on your team and you’ll be happy you gave me the opportunity.

Brett Favre and the Packers, also the Chargers.