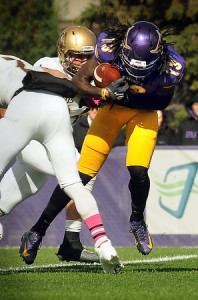 I chose MSU for many reasons. The environment was amazing and I became comfortable very quickly during my visit with the players. MSU also was the only school who gave me the opportunity to participate in both sports I love the most which are football and track. The coaching staff was very consistent in contacting be before and after I signed which made me feel like they really wanted me apart of their team.

4x Pro-Bowler and 3x Super Bowl Champion, Roger Craig. He’s one of the iconic figures from my hometown who worked very hard to get to where he was at and made such a huge impact in the NFL. His dedication and work ethic came second to know and I believe I can be the next to do so.

I haven’t met with any scouts, but I have a great feeling I will be in touch with them soon.

What separates me from other wide receivers is that I understand how important the blocking game is as well as the pass game. I know my assignments when it comes to reading defenses and adjust my route and who my blocking assignment is. Blocking has almost become an underrated skill for receivers in many of today’s offenses. Another thing that separates me from others is my ability to be physical and go up and get the football. I’m a 7 ft high jumper so I use my leaping ability to Moss defenders as they say. 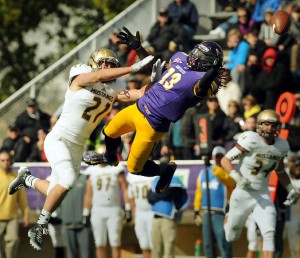 I look for how I can make my teammates better by doing my job better. I find the plays where I may miss a block or cut off a route too short and figure out how I can adjust that so my QB doesn’t have to force the ball or my RB doesn’t have to worry about the safety not being blocked.

My freshman year we had a safety by the name of Jesse Hamilton. He was all of 5’8 190 lbs but he was the fastest and most physical player on the team. It was difficult  going up against him in Oklahoma drills and one on one’s. Once I seen him come down hill on a run play and gave on of our best OL’s a concussion, I knew he was going to be the guy I didn’t want to get hit by.

It may be early, but it’s the player that popped up in my mind and it’s Chris Matthews WR for Seattle Seahawks. The reason why I chose him because he obviously isn’t the guy they want to get the ball to every game and give him a lot of looks, but once his number is called he goes out and makes plays. My role in throughout my college career was very similar to that. I knew my role as not being the primary wide out, but when given my chance to make a play or a key block I took full advantage of it.

I dealt with a serious back injury from my sophomore year to my senior year that had me feeling miserable. I went to multiple doctors, physical therapist and treatment centers to figure out what was wrong and none of them knew what it was. Roger Craig recommended his chiropractor Mitch Mally who worked on Roger and other professional athletes in the US and overseas. Mitch and I worked together to tackle my back issue and when he wasn’t in town his amazing staff worked just as hard to get me feeling better. To this day I thank him so much for getting my back on track.

I listen to music almost like everyone else, but there are two songs I always listen to last before I go out. On Fire by Young Dro and Go Hard by Gucci Mane in that order.

Understanding my role in everything and playing it to the fullest because if I don’t then I’ll be letting everyone down, especially my teammates.

Making the easy look hard and the hard look easy. Essentially, I’m working on becoming more consistent in what I do.

I’m the type of person who can bring excitement, charisma, resiliency and a positive attitude to the organization on and off the field. I believe that if given a chance to prove that I am worthy of representing this organization I will show you my hunger, pride and passion to convince your staff that I define what HWAD (hard work and dedication) is all about so that I can earn a spot on your roster.

The G.O.A.T Randy Moss and The Philadelphia Eagles