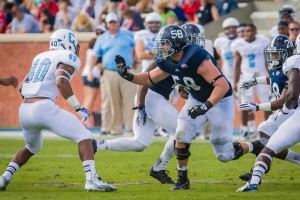 At an in-state school that was the best team of the programs recruiting me.

Both of my parents because they’ve made a great life for themselves through hard work and perseverance.

I’ve met with about 5 scouts from different teams saying that I have a good shot at making camp.

I played baseball and basketball along with football

I played center in my sophomore year and also defensive end

I believe my combination of good feet, intelligence and strength sets me apart

I look for tendencies in the defenders that I go up against. What is their favorite move? Do they prefer to beat you outside or inside? What signals are a dead giveaway for a blitz? 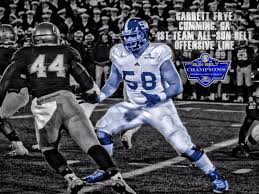 Jarvis Jones from the University of Georgia

Don’t really know enough about many lineman to compare myself

I guess the biggest obstacle was overcoming the fact that I was overlooked as a college athlete. I was never very big in high school but had enough ability to make a college program. I was not offered a full scholarship and pretty much walked on to Georgia Southern on nothing but a books scholarship. Working to gain enough weight and enough strength not only to play, but earn a scholarship so that I could complete my degree was the product of a ton of hard work and determination.

Not really, I just have to put everything on in a certain order otherwise it doesn’t feel right. We had a couple of rituals as an offensive line, but I did not have many that I did individually.

I feel that my biggest strengths are run blocking, strength, and football intelligence.

I would say that I am a young 21 year old strong, athletic offensive lineman with a great work ethic and a love for the game of football.

Being from Atlanta, I’ve always been a Falcons fan. I enjoyed watching guys like Deion Sanders, Michael Vick, Warrick Dunn, and Matt Ryan.

I would have dinner with Erk Russell because he was the greatest coach in Georgia Southern history and just had a personality about him that people were drawn to. He was a very inspirational man that I would have loved to share a conversation with. I would like to have dinner with Derek Jeter because he is one of the most iconic professional sports players of this generation. He is one of the best baseball players of all time and seems like a great person. Lastly I would like to have dinner with Bill Gates. Just seeing how successful he has been with his life, I would love to know what it takes to be that successful.