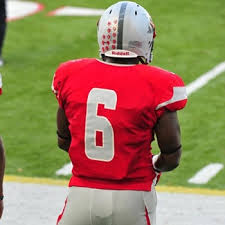 Where did you play college football?

A lot of schools were recruiting me out of High School, mainly Schools from the ACC.

I tore my ACL in the second round of the playoffs my senior year, before any school offered me. Once that happened, I received offers from two of the Division II schools, which were Mars Hill and Newberry College. Newberry College felt like the place where I needed to be, so that’s where it seemed God was leading me!

My Father, because he has played a huge role in molding me into the young man that I am today.

I haven’t met with them personally, however, I have been advised that a Carolina Panthers scout had asked about me. 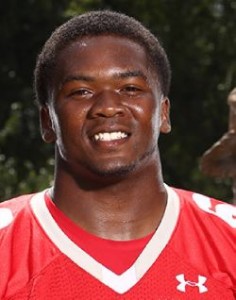 Yes, I played baseball for a few years, basketball, and I ran track.

I played Linebacker up until my sophomore year of high school, after that I strictly became an offensive player.

I have the tangibles to be an every down back. I can catch coming out of the backfield, I can pass protect, I can run between the tackles, get tough yardage, and I also have the speed to hit the outside if needed! I feel that the main thing that separates me from others at my position is the ability that I have been blessed with to break tackles and to gain yards after contact.

When I break down film I look at it from two perspectives: The run game and the pass game. The first thing I look at is the defensive base front. As a running back, I like to know the defense main base front, how many players they normally play with in the box. I also look for the different stunts and blitz that the defense does with their linebackers and defensive linemen as well as their secondary players. I also look to see how well the linebackers play in the pass game, knowing that is who I probably will be matched up with the whole game. Specifically, I look to see how well they cover in space, if they play drop back in coverage and play zone defense or if they man their linebackers up a lot, I look at their hips to see if they are fluid or stiff in the hips or not. Just little things like that are what I pay attention to.

That’s a hard question because I feel that I am always able to put out an effort that allows me to meet my opponents strengths with my own. However, based on production/stats the toughest opponent I have faced would have been Michael Gruber-ILB from Brevard.

I would have to say Marshawn Lynch, mainly because when he has the ball he runs fearlessly, with a relentless attitude and has the ability to change a game.

The biggest obstacle that I had to face in life that I have had to overcome is tearing my ACL my senior year of high school. That changed a lot for me and closed a lot of doors, which changed the route that I had to take to get to where I am today and I thank God for it though! I overcame it by my faith in God! I knew that He had better things in store for me. I just had to trust in Him and invest in the process.

The only pre-game ritual that I have is praying on the field before I play!

I am my biggest critic, so for me the answer is every aspect of my game, because no matter how good I am or become there is always room for improvement.

All I need is one chance, just give me an opportunity and watch me make the most of it! I will be one of the hardest working, if not THE hardest working man in the locker room, and you will not only get a productive player on the field, you will get a student of the game and a suitable representative of your organization off the field, as well!

I’ve never had a favorite NFL team, or really one particular favorite player, but I love watching the highlights of the great running backs such as Walter Payton, Eric Dickerson, Barry Sanders, Bo Jackson, and Herschel Walker.

Jesus Christ, My uncle JT (who died when I was born) and Walter Payton.