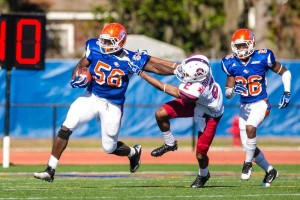 I was looking to transfer to another university when  a coach who recruited me in high school got the job at SSU.

My mother, she just has an undefeatable spirit and she gives her all to the people around her. 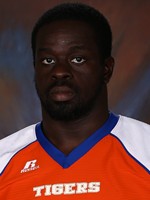 I played Baseball and basketball before football.

My versatility, football IQ and My speed/ size combination.

I usually start by breaking down the strengths and weaknesses of each O-lineman individually, then onto what they are asked to do collectively in their scheme. From there its trying to match moves with situations to make plays. A big part of that is knowing what to expect by studying and then being able to quickly recognize tendencies.

There is no individual player that stands out in my mind right now but two of the most physical games I have played in were both against Norfolk State.

Michael Bennett from the Seahawks, he is versatile, strong against the run and explosive in his pass rush I have been studying his game for a few years to see what I can incorporate into my game.

My injury in 2011, it was difficult and it halted my goals both athletically and academically. God has blessed me with a wonderful family who was there to support and encourage me. I worked hard and was able to improve my game from where it was before.

No rituals just prayer and visualization.

My versatility to play multiple positions and my ability to rush effectively with power and speed.

I don’t know when to stop working.

I am a hardworking person who is versatile, capable and willing to do whatever will help your team win. I am someone who will exceed the standards set by the team both on the field and in the community.

Derrick Thomas, I have been wearing #58 because of him since high school. My favorite team growing up was my hometown Atlanta Falcons.

My grandmother is number one, Angela Davis, and Derrick Thomas.