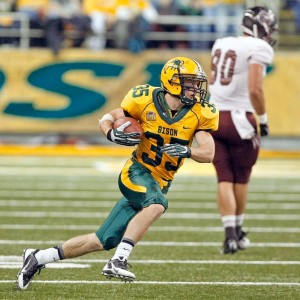 My intuition told me I could be a part of something extraordinary at NDSU.

Tom Brady. He is the ultimate competitor, he increases his teammates’ level of play with his attitude, and he believed in himself before anyone else did.

Have not met with any in person, but I’m told I was given a Day 3 preseason draft grade.

Quarterback in high school. Cornerback my RFr. season, and I took a few snaps at WR and returned a few kicks this past season.

Ability to communicate quickly and effectively, range in the middle of the field as well as ability to play man-to-man in the slot, and a year of experience at cornerback.

Formation, Down/Distance, and Field Position tendencies for the most part.

My former quarterback, Carson Wentz has the best arm I’ve faced, and John Crockett is the most explosive running back I ever competed against.

Eric Weddle, we have similar abilities to change speed and direction, and he plays the game with a lot of enthusiasm.

I like to get a nap in between pre-game meal and when its time to depart for the facility.