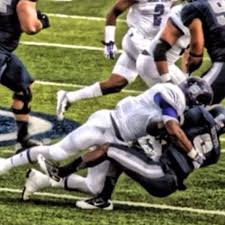 I played Junior college ball at the College of San Mateo in northern California where I received a full scholarship to play with the Weber State Wildcats for my remaining two years.

I was born in Inglewood California, and raised in Compton California.

I would say that God and his Son Jesus are both my role models. I look up to Jesus because he sacrificed himself for our sins and I would say God because he gave us his son so we can keep living here on earth. They both made unselfish moves and for that I live and play for them.

No scouts have talked to me just yet. However, for the scouts that do talk to me will be the ones who will make a great investment.

Throughout my childhood I always loved being active in sports. This led me to playing basketball, football, and track.

In high school I was more of an athlete than just a position player on the field. On offense I played QB, RB, and WR/Slot, and for defense I played Safety, linebacker, and DE. 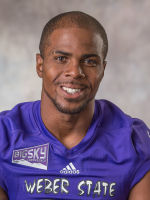 Film studies, hard work, dedicated, ambition, and the will to fight until death us part. I also have a good understanding of the QB mindset, late night workout sessions, and my relationship with the man above.

For the most part I’m looking for tendencies from alignments, formations, and substitutions. I look for who or what the opposing team may like to do when it comes to certain situations or downs. For example; who is their go to man on 3rd and long or 3rd and short? I also look for certain adjustments the QB may check to by looking at the defense disguise. Example: when the safeties show a two high shell, what does he want to check? Or when we show man coverage what is his go to plays/players?

Rashaan Vaughn played with me at the College of San Mateo where he was then picked by the Oregon Ducks and later drafted on to the Raiders.

I would compare myself to Sean Taylor for many reasons. He has always been my favorite player when it comes to football because I love when I inflict my will on to my opponents just like he did. Not only do I love to punish my opponents for trying me on the field, I get a real pleasure out of taking the ball away from them. If that’s by interception or smacking them into the middle of next week. My end goal is to punish them for having my ball.

The biggest obstacle in my life was moving away from home right after I graduated high school, so I can chase my dreams of graduating with a degree and playing ball. I graduated in 2010 from Compton High school. From there I moved to Nor Cal where I met my new team. My first year there I didn’t play due to the fact that I joined the team right before the season was starting, but the coaches loved the way I flew around and played downhill so they kept me around for next year. The following year (freshmen) I played in every game as well as started in the majority of them when we ran dime or nickel. Throughout my junior college days there was a lot of ups and downs for not only me but also my roommates. From moving to house to house with no lights, no food, no money, to earning scholarships to division 1 schools I can say that I’m proud of myself and also my roommates.

My heart beats stronger than the Lion in a jungle himself. My biggest strength is my mental toughness and the fight within side me. Quitting is never an option for me.

I would say my biggest weakness for me will be the fact that I’m not a giant on the field.

I come from a city where the chances for young males to make it out are very slim. When someone makes out of Compton past high school then through junior college to a Division-1AA team it a big thing for our community. However, I’m not trying to brag nor boast on my city because my city isn’t the one producing on the field. My city is what made me to who I am. It shaped me into one of the hardest working, dedicated, loyal, and ambitious person around in my class. I have dreams of being better than my favorite players (Sean Taylor, Troy Polamalu, Jack Tatum, and Ed reed) who all set records and to this day they have the up most respect from players all around. I know for a fact I can live my dreams when I make it to the NFL. The fight in me won’t let me rest until I can out beat their records.

My favorite team is the Saint Louis Rams and my favorite player to watch growing up is safety Jack Tatum from the Oakland Raiders.

I would choose Sean Taylor, Michael Jackson, and Bill Walsh.