Dolphins wide out asked to be traded or released; Team says NO 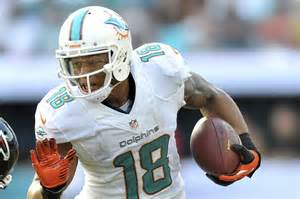 The Miami Dolphins have been getting rid of their wide receivers left and right. Yesterday the team cut Brian Hartline and Brandon Gibson, and they also put Mike Wallace on the trading block.  Well now, another wide receiver is not happy, and according to Armando Salguero of the Miami Herald, Rishard Matthews demanded to be released or traded.

Matthew Cannata    @PhinManiacs
Per @ArmandoSalguero, Rishard Matthews asked to be released or traded but the Dolphins told him no.

Salguero has learned that the former seventh round pick from Nevada does not want to be on the team.  The problem is the Dolphins denied the request.  The Dolphins will only have Matt Hazel and Jarvis Landry on their roster, if the they trade/cut Wallace and get rid of Matthews.  The Dolphins might need to go heavy on the wide receiver position in free agency and the draft, because they continue to take weapons from Ryan Tannehill and expect him to produce. It just won’t happen….