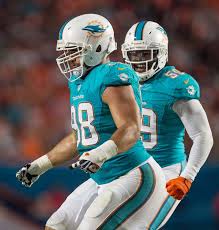 According to Barry Jackson of the Miami Herald, the Miami Dolphins are hoping to keep a couple of their guys on the roster, while adding a veteran linebacker from the Jets.  Barry Jackson said in a Miami Buzz article last night that the Dolphins and tight end Charles Clay are working hard on getting a deal done, but there is still a little bit of uncertainty.  He also mentioned Jared Odrick saying the Phins will extend an offer to the former Penn State pass rusher, but it will be in his ball park so to speak.  Jackson also talked about bringing in veteran linebacker David Harris.  Harris has been a very productive linebacker since entering the NFL from the University of Michigan.  Harris is a bit undersized, but he can play and has been more productive than any of the Phins linebackers over the past several years.

The Dolphins and tight end Charles Clay are in active negotiations and there is cautious optimism that a deal will get done, though not certainty. The Dolphins very much like the Clay/Dion Sims tight end tandem.

Meanwhile, the Dolphins have informed defensive tackle Jared Odrick that they plan to make an offer to keep him. But the Dolphins have confided in people that he might command more than what they’re willing to pay and acknowledge there’s certainly a possibility they might lose him. He could land a deal worth $7 million-plus per season.

The Dolphins have told multiple people that they want to add a starting linebacker, and they’re expected to pursue the Jets’ David Harris, 31, who had 123 tackles and 5.5 sacks in 2014 and is considered the best free agent inside linebacker.

If the Dolphins can someone keep both Clay and Odrick they will be a better football team. The major thing about making a solid football team is keeping your key pieces.  That is very important and the Dolphins will need to do that if they want to get over the hump.