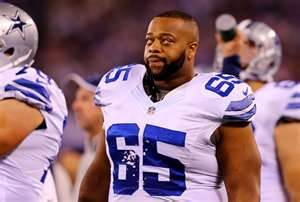 Today the Dallas Cowboys signed offensive guard Ronald Leary to a one-year deal worth $585,000. He has started 31 of the last 32 games, missing one game in 2014 because of a groin injury. Originally signed as an undrafted free agent in 2012, Leary has developed into a dependable starter between Pro Bowlers Tyron Smith and Travis Frederick.

The Cowboys also signed tackle Darrion Weems to a one-year deal worth $585,000 as an exclusive-rights free agent. He missed last season with shoulder reconstruction surgery.

The Cowboys also re-worked the contract of linebacker Dekoda Watson, dropping his base salary from $1.25 million to $745,000. Signed in November, Watson played in only one regular-season game because of a hamstring injury. He played in both playoff contests.