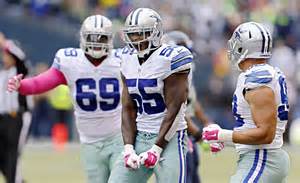 Today, Rolando McClain the former first round pick of the Oakland Raiders took another set back in his career. After retiring from football and really rebounding last year, McClain is back in the dog house.

According to ESPN’s Adam Schefter and Todd Archer, McClain is set to be docked four game checks for violating the NFL’s substance-abuse policy.

The punishment is just a fine and not a suspension, according to ESPN. He is currently a free agent, and now the Cowboys need to make him an offer.  They can sign him to a deal that should be a cheaper deal for the incident.

According to NFL’s new substance abuse policy, a player is fined for a third failed test. Another failed test would be a 4-game suspension.

NFL Draft Diamonds was created to assist the underdogs playing the sport. We call them diamonds in the rough. My name is Damond Talbot, I have worked extremely hard to help hundreds of small school players over the past several years, and will continue my mission. We have several contributors on this site, and if they contribute their name and contact will be in the piece above. You can email me at nfldraftdiamo[email protected]