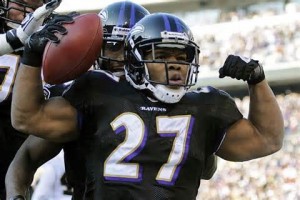 The Buffalo Bills could be in a pickle soon at the running back position.  Right now the team currently has 3 players under contract.  Anthony Dixon, Bryce Brown and Fred Jackson who is aging, but the team let C.J. Spiller’s contract void.  So technically he will be a free agent unless the Bills can somehow get him signed up.

With Fred Jackson getting up there in age, the Bills backfield is not what you would consider the best.  There is a player out there who would be rather cheap, and is reinstated.  With Rex Ryan taking a shot on Richie Incognito, it makes you wonder if the former Ravens coach will bring in Ray Rice?  In 2008, Rex Ryan was the assistant head coach in Baltimore when Rice was drafted in the second round.  Rice would come at a very cheap rate, because as of right now he has no home and will need to prove his worth.

Rice is the back you want in Buffalo, a bigger back who has ran in the cold weather his entire career since he is from New Rochelle, New York.  Rice is not as explosive as C.J. Spiller, but he is way more affective running through the holes.  If the Bills can keep the ground and pound game going the Bills could get away with using E.J. Manuel at quarterback for at least another year.  They can build their line and run through teams.  If they can keep their defense today the Bills could be dangerous.