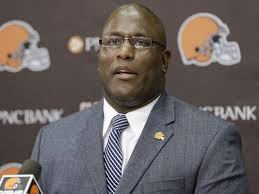 Browns general manager Ray Farmer said it was his mistake to send texts from the press box to the sideline during games last season. That’s against NFL rules. The texts reportedly questioned play calling and personnel decisions. That’s against common football decorum.

“It was me,” Farmer said. “To that degree, I have apologized to the people in the building, coach (Mike) Pettine, (Browns owner) Jimmy Haslam, the rest of the football staff.

“I take full responsibility for myself and my actions.”

“It’s not an excuse, but sometimes your emotions get the best of you,” Farmer said.

Offensive coordinator Kyle Shanahan left for the Atlanta Falcons after the season, and it has been widely speculated that the texts played a part in that.