Brandon Marshall says he would not mind playing for the Ravens 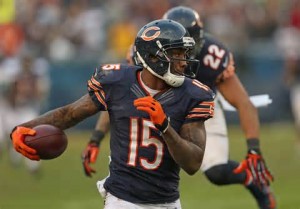 The Bears wideout Brandon Marshall, who still has three years left on his deal in Chicago, interviewed John Harbaugh for his side gig as a reporter for Showtime’s Inside The NFL last week, and he made the statement he would not mind playing for the Ravens.

“(During Super Bowl Week) I actually interviewed him,” Marshall said on Inside The NFL, via the Ravens’ official website. “I said, ‘If I played for you, would you let me do Inside the NFL?’

“He said, ‘Oh, absolutely.’ He knew I was taking a lot of heat for doing the show. But, when you are the first in the space to do something like this, you are going to get a lot of push-back and we (the Bears) had the worst year possible.”

NFL Draft Diamonds was created to assist the underdogs playing the sport. We call them diamonds in the rough. My name is Damond Talbot, I have worked extremely hard to help hundreds of small school players over the past several years, and will continue my mission. We have several contributors on this site, and if they contribute their name and contact will be in the piece above. You can email me at [email protected]m