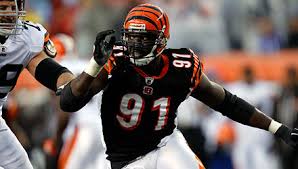 Today the Cincinnati Bengals joined the rest of the league by releasing two veteran players.  The team released both Robert Geathers and Greg Little.

Little caught 6 passes for 68 yards last year for the Bengals, and the team was able to save some money by releasing him.

The release of the two veterans saves the team roughly 3.745 million dollars.  745, 000 dollars is saved for Little and a little over 3 million is saved for Geathers.