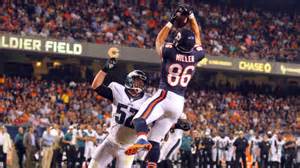 Zach Miller suffered a broken foot last season when it seemed like the veteran was making a roster push.

Friday, the Bears made it official: they want to see if he can do it again. Miller was signed to a one-year contract extension.

After signing with the Bears last offseason, Miller caught six passes for 68 yards and two scores in the team’s first preseason game. A left foot Lisfranc injury, though, landed him on injured reserve Aug. 15.

Miller played 33 games with the Jaguars from 2009-11, catching 45 passes for 470 yards and four scores. He’ll have a chance to compete for Martellus Bennett’s backup spot this summer.