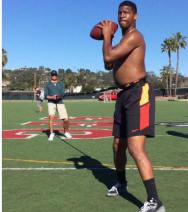 Every year the NFL invites players to the Combine who have had a rough past, or as NFL teams call it red flags.  Well these five players will have to answer several questions from NFL scouts and GM’s this week.

Has had multiple off-field issues during his time at Michigan and was dismissed from Michigan in November after being arrested on domestic violence charges. Clark has mid-round talent, but his arrest and prior indiscretions make it unlikely that teams will be willing to draft him. If he gets everything sorted out, he has a shot at getting into a camp.

Considered a problem child at Missouri. Suspended twice by Missouri and arrested twice for marijuana-related incidents. Kicked off team at Missouri in April 2014 after details of his alleged role in an alleged burglary were released by Columbia, Mo., police. He allegedly shoved a female student down some stairs during the alleged incident, but no charges were filed. It’s easy to bet on the traits when a receiver has high football character and is a willing worker, but teams could pass on the traits early in the draft due to his perceived lack of work ethic and overall character.

Suspended for one game in 2014 by head coach Chris Petersen for a sideline tantrum that followed personal foul penalty. Was ultimately dismissed from team over multiple run-ins with coaching staff. Overly emotional and prone to mental mistakes because of it. Slower than expected to squeeze routes in space. Doesn’t take coaching. Talented cover cornerback with size, ball skills and the confidence NFL teams are looking for, but lacks the necessary discipline and maturity on the field and in practice.

Off-the-field character and ability to lead on NFL level are his primary obstacles, according to NFL evaluators. Winston’s football potential is clearer than so-called “system” or “one-read” quarterbacks, but every stone must be overturned in an attempt to piece together a predictive character profile on Winston. Winston’s supreme confidence might be considered arrogance by some, but even that trait will be alluring to teams who need to find a franchise quarterback.

On the field he might be the best running back in the draft. Off the field Gurley was busted for selling his autograph and making money. I do not know if it will affect him too much because the guy is a stud back, but with the knee injury he suffered this year, he could be sent through many medical questions as well as his red flag issue with the autographs.