49ers are releasing Stevie Johnson; Could he return to the Bills? 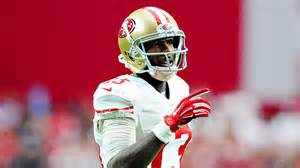 The San Francisco 49ers are releasing wide receiver Stevie Johnson. Johnson really stepped up this year for the Niners when they had numerous injuries.  He was a much loved wide receiver in the city of Buffalo, but after Doug Marrone entered the picture, Stevie was traded.

On May 9, 2014, after the Buffalo Bills acquired Sammy Watkins in the 2014 NFL Draft, the Bills traded Johnson to the San Francisco 49ers for a conditional fourth round pick in 2015 Draft that could become a third round selection The Bills young wide receivers loved Stevie Johnson and he was one of the most loved wide outs in the history of Buffalo.

Dianna Marie Russini    @NBCdianna
Per sources, 49ers are expected to release Stevie Johnson. This will save 5.5 million of cap room. #49ers

Johnson did produce three back to back to back 1000 yard seasons in the city of Buffalo. He did put it on for his city, so could he come back to the city that gave him his first shot to play?

The San Francisco 49ers want to keep Stevie Johnson, but not at his current price tag.

NFL Media Insider Ian Rapoport reported Saturday that a pay cut looms for the veteran wideout scheduled to make $5.5 million next season, according to a pair of sources informed of the team’s thinking.