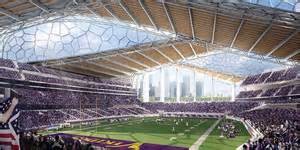 According to the Minnesota Vikings website, the Vikings will have the first stadium in the NFL with LED Lighting.  It sounds like the Vikings are going all in on their new home.  I love it.

The Vikings and Ephesus Lighting, Inc., the leader in providing LED lighting solutions for sports facilities, announced earlier this week their partnership to illuminate the new stadium’s field with high-performance LED lights. The announcement, which comes after the Vikings earlier decision to fund a $1.3 million upgrade from traditional metal halide lights to LED, makes the Vikings stadium the first NFL facility to be constructed with LED lighting (Houston and Arizona, home of this weekend’s Super Bowl, have upgraded since opening).

LED lighting increases illumination, as well as provides natural and more uniform light that improves the overall clarity of the playing surface and allows for a better experience for fans in the stadium and those watching on high-definition television.

It is projected to consume 75% less energy as compared to a traditional metal halide system, the new LED system is also consistent with the stadium’s mission to be as environmentally friendly and energy-efficient as possible.