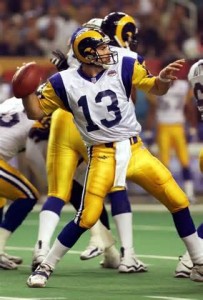 The Rams are now officially year-to-year on their lease at the Edward Jones Dome and the train is moving fast down the tracks on owner Stan Kroenke’s stadium plan in Los Angeles. St. Louis is attempting to make an effort to keep the Rams with a stadium plan of its own, but there are significant hurdles — especially getting Kroenke to agree to pay for a big chunk of it — that exist.

Well when Kurt Warner the former big time quarterback was asked about the team staying in St. Louis and he responded genuinely saying he wants the team to stay.