Snoop Dogg, and other former players played in a charity football game against Wounded Warriors 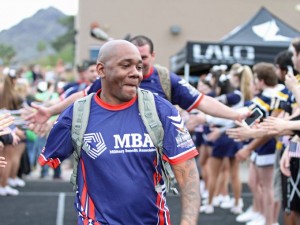 This week at Shadow Mountain High School in Phoenix, hundreds of fans gathered to watch two teams face off in a flag football game.

Seattle native and ESPN commentator Kenny Mayne joined Army, Navy, Marine Corp and Air Force veterans, as well as Snoop Dogg, to play a team of retired NFL players. Before the game started, fans created a tunnel with flags for the veterans to enter the field through from their bus. In addition, a bicycle gang led them into the parking lot.

The proceeds from the game went to the Wounded Warriors Amputee Football Team and the Veteran’s Initiatives of Arizona. A few retired players with Northwest ties took part in the event, including former Seahawks quarterback Dave Krieg.