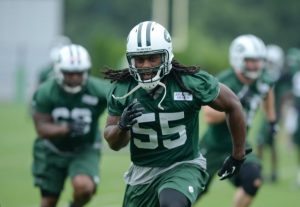 The New York Jets are already in the hot seat with the media, but now former Patriots linebacker Jermaine Cunningham has been arrested for spreading sexual photos without a person’s consent, according to NJ.com.

Jets outside linebacker Jermaine Cunningham has been accused of spreading sexual images and illegally transporting a handgun in his Audi.

Cunningham was arrested Dec. 29 at his Lafayette Avenue apartment in Summit after police responded to a 911 call from someone near the apartment, said Mark Spivey, spokesman for the Union County Prosecutor’s office.

Details of the events were sketchy, but police said they received the call at about 4:15 p.m.

While officers were at the scene, they obtained Cunningham’s consent to search his Audi, and found a .380 handgun in the glove compartment, Spivey said.

He said Cunningham was charged with third-degree invasion of privacy under a state law that prohibits the disclosure of sexual images of a person without the individual’s consent. Spivey declined to give further details surrounding that charge.