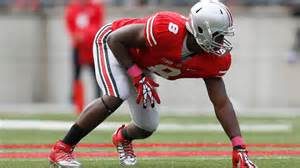 Spence played for Ohio State in 2012 and 2013 before being suspended and eventually declared ineligible after failing two drug tests. He was initially suspended for the 2014 Orange Bowl and the first two games of the 2014 season after testing positive for ecstasy last December.

Noah Spence, a former five-star recruit, recorded eight sacks and 14.5 tackles for loss in 2013, earning first-team All-Big Ten honors. He explored entering the NFL draft and had been projected as a third- to fifth-round draft pick. But he opted for another year in college. Noah is on track to graduate in December.