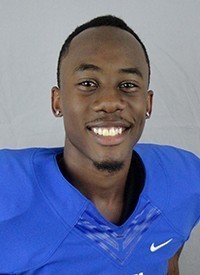 I chose Baylor because it was close to home and my family could see me play, but also because I wanted a great education. I decided on Houston Baptist because it was a great chance to play for Aaron Fletcher again after high school and he’s great at what he does when it comes to coaching cornerbacks and helping you learn the game.

I would say my mother because I was able to see her raise two children on her own, and at the same time never really had it but we never knew. She was the one who taught me how to play football, put up my basketball goal, while also working nights. And to see how far i have come she will forever be my role model no matter what. 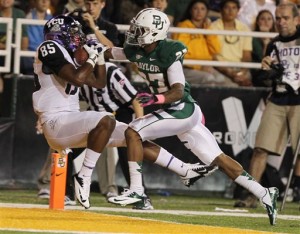 I’ve met with one from St. Louis but it was just taking down basic information a lot of questions about how strengths and weakness, and also how I learn the game.

I tend to look for players strengths what they do the best, because when you find that you can find different adjustments in your game that will help you

I try not to I mean every person game is different and some do things better than others. I just try and go out there and be the best Tyler Stephenson I can be and play t my full potential.

I would say growing up without my father. It was pretty different because all the things dads are suppose to do with a son i didn’t have that. I was able to over come it because I had a hell of a mother who rode me just as hard as dad would his son, and everything a dad was suppose to teach his son I learned from my mother.

Play a couple of songs but the closer it gets to game time I watch film and then get to myself and pray.

I would say my feet and hips and being able to have a great vertical transition.

I’ve been selling myself my entire life that’s what it’s about.

Randy Moss and I loved the Vikings when it was Randy, Chris Carter, and Culpepper