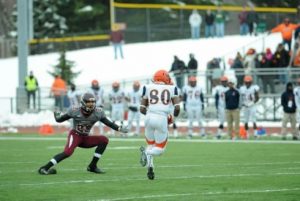 Two teams, only one offered me financial help.

My role model is my mother. She has gone above and beyond to support me throughout my football career. I hope one day I can return the favor for everything she has done for me.

I have not met with any scouts.

Growing up I was involved in soccer, bowling, baseball and track, as well as football.

I have played basically every position while in high school, but at the collegiate level I played receiver my freshman year before switching to safety my sophomore season.

My football IQ, and my continuous physical play.

My initial goal when I begin watching film is to break down the opponents tendencies. I like to find their go to plays. Then I begin to break down their personnel. I want to know who I may be playing against and how they play. I look for small techniques that some players might have, especially the quarterback. I watch to see if he stares down his receiver or he gets shook after his initial read is not there. Then lastly I get a feel for his long arm coming off the ball, whether he has a short or long release may give me an opportunity to jump a pass.

One of the better players I have played against has been Matt Soltes from East Stroudsburg. He throws a good ball and has short mechanics to get the ball out fast. He is also a mobile quarterback who can elude pressure to either take off and run or by his receivers’ time to get open. 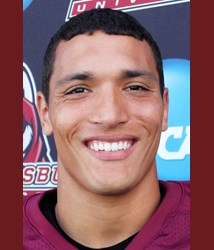 I don’t know that I can compare myself to one player. I feel as though I possess certain qualities from multiple players. From a special teams standpoint I look at a guy like Chris Maragos who is always around the ball on every special teams unit. Then on defense I look at a guy like Cam Chancellor who is very physical while playing at linebacker depth, whether it means coming up and stopping the run or playing crossing routes mid-range.

To keep the personal family situations out of this I will refer to situations I have faced on the field. I have been told by many coaches that I am not good enough to play at the collegiate level; one coach even said “That kid Tomas Cabrera will never play safety for us”. At times I was pulled off special teams units while producing. I feel as though I have been under-appreciated while playing at the collegiate level but like everything else I have not said a word but instead kept my head down and continued to work and give my coaches no doubt that I am their guy.

I do not have any pre-game rituals, I just try to relax and have fun with the process. I never stress before a game because I know I prepare enough leading up to it to be ready when it comes.

My biggest strength is putting a pair of pads on and going out and playing football. I am physical player that loves to be around the ball.

My biggest technical weakness is playing man coverage. At times I have struggled playing lock down man coverage on guys in the slot. More specifically, smaller receivers, not so much tight ends.

Every GM wants a guy that will sit down and say I am going to work my butt off to make this team, I will keep my head straight and will not be involved with off the field issues, which I fully intend to follow. But there is nothing more important to me than my family and this game. They both go hand and hand. When I fail at this game I feel like I am letting down so many people. Especially those who have helped me get to this point in my career. And at no point am I satisfied with failing at this game or failing with my family. If given the opportunity to play for you “GM” I will truly devote my entire self to this organization, this team and this game.

I would have dinner with Kevin Hart, Dwayne “The Rock” Johnson and Jenifer Lopez. ​