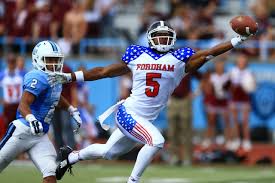 Location , great facilities, and only 1a offer

Antonio Brown because he has an excellent work ethic and is a classy guy. I Like watching him play on Sundays, rare talent.

I tried all sports growing up, basketball, track, soccer, and baseball . But did basketball and  track in high school.

I just played wide receiver in college , but also played running back and safety in high school.

At receiver I separate my self due to my ability to make people miss and gain yards after the catch. Also my big play ability in terms of going deep . Also I am a fearless player who loves competition and I always strive to be the best.

Well when breaking down opponent film I look for clues to help me recognize coverages. I Also read how the corners backpedal as well as there tendencies in press coverage.

Leonard Johnson from Iowa state was the toughest player I have faced. I went against him my red shirt Freshman year at Uconn , he was a good college db.

I would compare my self to Greg Jennings because we are around the same size and have similar body types. I see the same type of burst and speed in me as well as route technique when I watch my film as well as his.

My biggest obstacle in my life was during my years at uconn when I was not receiving playing time no matter how hard I worked. But I kept working hard and saw an opportunity to leave and start new as well as reunite back with Moorhead after he had left to take the HC job at Fordham after my redshirt year.

My biggest strength is my drive and willingness to be great and get better each day as well as challenge myself. Before the season my coach told me to be first team all conference and an all American. And I took that as a challenge and accomplished the goals he set for me.

If there is one thing I would like to work on it would just improving my route running technique and fundamentals.

I am the type of player and man who will never quit and I always look to improve each and everyday. Not just in football but in every aspect of my life.

My dad was my favorite player growing up and my favorite team probably were the Titans because I always used them in Madden.

I would want to have dinner with Jesus, Jerry Rice, and Cristiano Ronaldo lol.