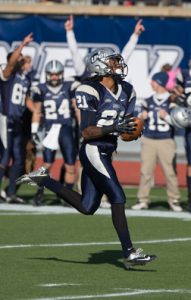 I chose New Hampshire because it was a family environment and a consistent winning program.

My role models would have to be my parents because of the way they provide for me and my sisters.

No scouts have met with me yet just talked to my coach.

I played basketball, baseball, and ran track growing up.

I played receiver in high school but other than that I always played corner. 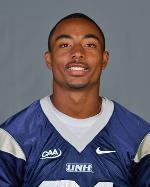 What separates me is my feet and hips. Also my knowledge of route concepts out of certain formations by watching film.

When breaking down film I look for who the best receiver is and the certain ways that they try to get him the ball. Also the tendencies of certain routes out of different formations and down and distances.

The toughest player I faced would have to be between Ben Edwards, and my Roomate Rj Harris in practice.

One player I would compare myself to would be Talib for the Broncos because of his size and his overall play.

The biggest obstacle I had to overcome was my initial college transition and not playing my first couple years. I overcame it by having the support of older players in our program and working harder.

I usually just stretch and listen to a lot of different music.

My biggest strength is my communication on the field and my footwork.

My biggest weakness is probably my speed and strength.

I would say I’m a competitor and I’m a hard worker and will do whatever it takes to be great.