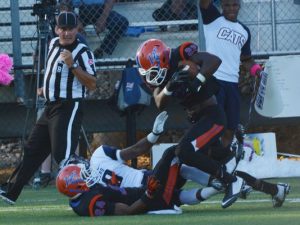 My role model is my uncle because he took me in and helped raised me when my mom or dad wasn’t there for me.

Toronto from the CFL talked to me at the dream bowl this weekend, told me he liked me as a all around player from playing man to man coverage to sticking my nose in the box. He told me I was very athletic and that he will be keeping in touch.

played baseball growing up and was actually better at baseball than football but my love for football grew greater and I let baseball go.

I played all special teams

What separates me from others would be my ability to react and read a quarterback. Also the ability to read a receiver and the leadership I bring with me and being able to adapt to any situation or position. I am a quick learner.

When I break down film I look at qb tendencies, who’s his favorite target, how does he respond to pressure. Also I study to see what type of receiver are they, do they run every route hard, do they take plays off, do they drop they’re hands coming out of certain routes.

Eddie Lacy is the toughest player I ever face, I played on the same team as him in high school and he was tough to handle in practice.

I would say Ed Reed, because he’s a ball hawk, and not afraid to come up and hit. Like myself

The biggest obstacle I’ve had to over come in life would be dealing with my mom and dad not being there for me. I over came it by making a promise to myself that I wouldn’t be another statistic, and I’ve turned out pretty good.

My pregame ritual would be praying and asking God for guidance and strength before I play.

My biggest strength would be being a leader and being able to learn quick and adapt to different situations. And in coverage i am pretty good.

My biggest weakness would be learning to stay patience at times and my man coverage is good but it could be a lot better.

I would tell the GM that I would be worth the second because I’m a young guy that comes from nothing that’s very hungry and plays with a chip on my shoulder for schools passing me up. I’m great in coverage, I can play man, I’m a quick learner and I’ll play any position you want me to play and get the job done.

My favorite player was Ed Reed and the late Sean Taylor. My favorite team growing up was The U back when they had it going on.

I would choose Ed Reed, Sean Taylor, and Earl Thomas