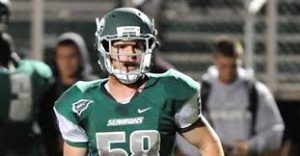 I played for Wagner College in Staten Island, NY

It was close to home, Wagner’s football program gave off a family based vibe which is something I loved, also the academic opportunities New York City brings to the table.

Brick Township, NJ down at the Jersey Shore.

A big role model of mine is Prince Amukamara. I became friends with him a few years ago through a Fellowship of Christian Athletes event at Wagner and since then he has been so motivational in my life and helping me stay strong in with my faith.

A few did when I played in the FCS National Bowl and they requested film.

I played baseball and lacrosse.

Offensive line and Outside Linebacker

As a long snapper, my consistency and reliability. I was a two time All-American at Wagner.

Accuracy, speed, and my down field coverage (punt)/blocking (field goal)

Believe it or not, it wasn’t in college, my former high school teammate Will Wowkanyn was a savage. I really shouldn’t say was because he is still playing. He just finished up his last junior college season in November. Keep an eye out for his name, he has a lot of opportunities in front of him.

I would say Matt Overton, the Long Snapper of the Indianapolis Colts. He has heart like no other person, his story is amazing and how he ended up with the Colts. He is one of the best, if not THE best in the NFL right now. He is someone I truly aspire to be like.

I think the biggest obstacle for me was finding my way to the Lord. I felt misguided going into college, I felt out of place and lost and luckily I found God. Even though this really does not seem like a huge obstacle to others, to me it was. That journey I had up until finding my way to God was difficult but it was the most rewarding.

I do my snapping warmups just like every other snapper but I listen to some of my favorite music including The Beastie Boys, Public Enemy, Rage Against the Machine, Rise Against, and I usually throw some Led Zeppelin in there.

My heart and love for the game. I have been told I have a lot of grit.

I am very nit-picky, I kind of stress over dumb things sometimes but I think it is a side effect of having a big heart.

If you want heart and soul, a player who leads by example, a selfless teammate that will do anything to help the team win, and someone who can help you get the ball to the punter when we are backed up into our own end zone, I am your guy.

My favorite team growing up was the Giants

I would choose my savior Jesus Christ, Founding Father/President George Washington, and of course the great Vince Lombardi