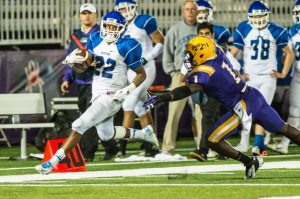 Had some FCS interest but no full scholarships.

I was back in New York with my family freaking out about school and my younger sister mentioned Albany. I checked it out and decided to walk on there.

A little bit of everywhere. I was born in Nigeria and lived there until I was 13. When we moved to the United States, I lived in Staten Island until my sophomore year of high school when I moved in with my dad in Pittsburgh Pennsylvania

Troy Polamalu, he is just different. One thing that stands out to me is how consistent he has been over the years. He is always at the same level, never too high and never too low. No matter how the game is going, you know he is going to do his jobs. Troy is also one of those guys you just know won’t get in trouble off the field. He is the epitome of a football player.

None yet but after the regional combine in Baltimore they will be on like white on rice.

I played soccer for some time while in Africa, but just did not excel at it.

I have played everywhere on the defense except the defensive line while in college. Middle line backer, Outside linebacker, Nickel, Both safety positions and some corner in our blitz packages.

I’m a very physical player. I LOVE to hit, its my favorite part of the game, Taking the breathe out of another mans chest when you make that big hit, It makes the grind all worth it. I can also say I am the strongest safety in this draft class.

Quarterback tendencies are big. Do they look off the safeties? How fast is their release? Do they panic under pressure or dumb the ball off to their check down? Those are the 3 biggest things to me

Taylor Heinicke, I think he is a guy that we will definitely see on Sundays. 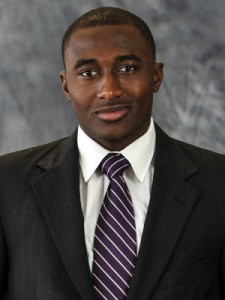 am best in the box just like troy. I am a very consistent player and a sure tackler. I am also very versatile like Polamalu.

Moving to America with my family and having almost nothing was rough. We were basically homeless for some time and had to learn a lot of new things in a new country. We stuck together as a family and just knew better days were ahead. I had to step up a lot because my parents had to take multiple jobs to keep up with the bills. This period of time thought me how to grind for more. Its okay to be down for some time as long as you are making moves for more.

I always say a prayer for protection.

My strength and my football IQ I don’t have any issue taking on full backs or tightends or tackling at all. As a safety, you always have to know what is going on and be able to control your defense and with my IQ I can do that.

When I watch the way the game is played now and see the range smaller safeties like Earl Thomas have. That is something I need to have and is something I am focusing on right now.

You won’t regret signing me and I will give you the best value for your buck.

Steelers. They always had a great defense and that is something I respected. They played smash mouth football on offense and its too hard to ignore that.