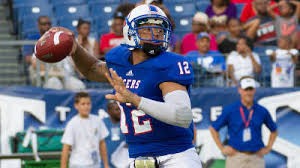 Tennessee State had some quarterback struggles when they were recruiting me and there could be an opportunity for me to play early. They needed a quarterback and I felt like I could be that quarterback.

Yes I’ve met with several scouts and they all say I have a strong arm, and all I need to do is work on my footwork.

I played football, baseball and soccer as a kid. 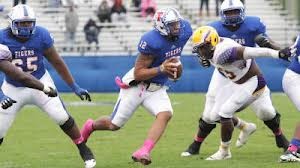 My pocket presence and being a student of the game. I have an ability to extend plays, I am hard to tackle. I am right handed and I can roll to my left as easily as my right.

I watch the habits of the safeties, the corners and the linebackers. How fast they are and how well the DBs match up with my receivers. What coverages do they use to match up with my personnel.

It would be Ben Roethlisberger or Andrew Luck. Both are very good pocket passers, very smart and both know when to make plays with their legs.

Getting hurt during my Junior year in college and not knowing if I would make it back before the end of the season. I had intense rehab to get back on the field in time to make the playoffs.

Listening to music, eat a Snicker bar, I play the game in my head and most importantly I say a prayer in the end-zone before the coin toss.

My arm strength for sure.

Sometimes I will force a play, when maybe I should just throw the ball away.

I am a real quarterback, a smart quarterback. I love the game of football, I love to study play books and watch/breakdown film. I guarantee you will get 100% from me every day.

I loved Donovan McNabb and the Pittsburgh Steelers.