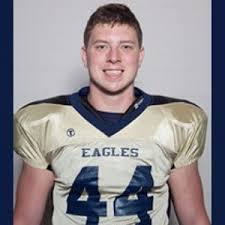 The coaches. I felt most comfortable with the coaches at Clarion and I am glad I chose to play there.

I am from Pittsburgh, PA and attended Upper St. Clair High School.

My grandfather. He was a captain and All-American at the University of Pittsburgh. He also was a captain in basketball and played baseball at Pitt. He was drafted by the Los Angeles Rams and chose instead to go to medical school. He has been my idol since I can remember and by being able to follow in his footsteps would be a dream come true.

I’ve spoken with a few scouts but nothing serious as of yet. I feel that I went a little unnoticed due to the type of offense we ran in college. However, all I need is one opportunity in order to prove I belong.

Yes, I played basketball all the way through high school.

A little bit of fullback and defensive end in high school.

I separate myself from others by being an all-around player. I block and catch well and I feel that most tight ends usually are good at one or the other, I pride myself on doing both well.

When breaking down film I usually like to look what type of fronts the defense I’m facing likes to show and also look at the different coverages they play. I then focus on the players I know ill be facing one on one and look for their tendencies and weaknesses. I also study myself a lot to see if I can catch any habits or tendencies that I can correct.

The toughest player I’ve ever faced was my teammate Julian Howsare in practice everyday. It was great practicing against him because it certainly brought the best out of each of us every single day leading up to Saturday.

I like to think I play like Heath Miller of the Pittsburgh Steelers. He is arguably the best all around tight end in the NFL today and I try to imitate his game.

I think one of the biggest obstacles I’ve faced is going to a smaller school and completely dedicating myself to football. Every decision I make comes back to whether it will positively or negatively affect me in football. I also switched high schools after my sophomore year due to my dad getting a new job, it was difficult to leave my old friends behind however its worked out in the end.

I do not really have any pregame rituals other than just listening to music.

My biggest strength is my work ethic and leadership, along with my blocking and catching. I also feel that I have pretty good footwork. I had the privilege of being coached by a former University of Wisconsin offensive lineman, Matt Lawrence, he was able to really help me with my footwork.

My biggest weakness would be that I sometimes try to make a big play when there isn’t one.

Just give me a chance. I know if I am given an opportunity to play in the NFL I would make the most of it and prove that I belong. I would be one of the hardest working individuals and would do anything to succeed.

The Pittsburgh Steelers were my favorite team and Dan Marino was always my favorite player.

I would choose Michael Jordan, Will Smith and Beyoncé