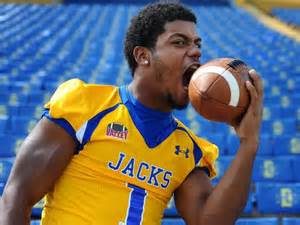 Out of high school not many schools were recruiting me because of my grade point average so that’s why I went to a junior college in California (Ventura College.)

I chose South Dakota State because it was the best fit for me. I wanted to play at a high level and the Missouri Valley conference had the exact football I was looking for.

My role model is my older brother because he is everything you want in a person.

At the moment no scouts have met with me but my coach did say some were interested in me. They saw my junior day numbers (40 yrd dash & measurements.)

Growing up I played a lot of sports. But my main ones were football and track.

In football I played running back and wide receiver and on defense I played corner back.

At my position I separate myself from other because I will do anything to win the play. I have a knack for the ball and will compete my tail off to be respected.

When breaking down film one thing I look for is the quarterback; who is his favorite target, route combinations, receiver releases, receiver tendencies, receiver splits from each other, linemen stances and quarterback hand signals.

If I could compare my play with someone in the NFL it would be Earl Thomas because how how aggressive I tend to play. I take risk and I’m not scared to fill in for the run.

My biggest obstacle I had to overcome was going all the way to California for school. I went there with 6 other guys from Massachusetts and they all ended up leaving after the first semester. It was tough for me because I didn’t know if was going to make it. Thankfully I had a loving support system who encouraged me to stick it through and ended up getting a couple scholarships.

Before a game I always like to put my headphones on, close my eyes and sit in my locker. I listen to a little bit of everything and think about how blessed I am to play the game. I also always run through the call sheet and visualize plays in my head.

What is your biggest strength and weakness?

I would say my biggest strength would be my feet. And my biggest weakness at times could be my eyes. I tend to look at too much sometimes and that leads to being a step late.

If you were a GM and you gave me one second to sell myself I would say you need a guy like me because I will give my all for my teammates on and off the field and I will seek wisdom from teammates because I want to be great.

My favorite player in the NFL will have to be Charles Woodson and my favorite NFL team are the Patriots.

If I could choose three people to have dinner with dead or alive I would choose Christepher Wallace, Dion Sanders & Bill Gates.