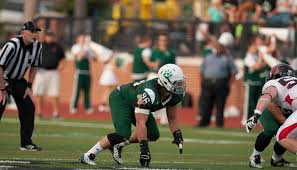 I had 5 or 6 schools but only considered 3 schools.

I chose Northwest because of the tradition and the family atmosphere that I didn’t find at the other schools I visited.

I am from Omaha, NE

I would have to say my parents. The reason I am where I am is because of them and what they have instilled in me.

I have talked to scouts from all 32 teams.

I played 7 games as a redshirt freshman at defensive tackle.

I am not someone you just runs up field every play like a lot of defensive ends. In our defense we must distinguish between run and pass and react to the blocks given. I disengage off blocks rather than just letting go and running.

I start the week off by looking at blocks I will receive and how they step as well as if the offensive line gives away run and pass. Next I look tendencies the offense has regarding formation, personnel, back field set and motion.

I would have to say Cole Manhart from Nebraska Kearney and Amini Silatolu from Midwestern State. 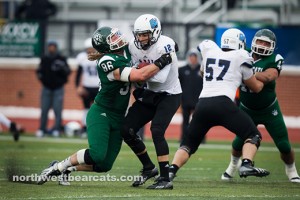 I don’t think I can compare myself to an NFL player because I haven’t played at that level. However I look up to Jared Allen and how he plays.

I don’t really have any major pre-game rituals. I do stretch in the weight room and have a playlist that I will listen to.

I believe I have good hands, am understanding of the game that allows me to react to what I see quickly. Also I think I can counter the offensive lineman if he takes away my first move when I am pass rushing.

There little things that I must improve on like my feet and keeping them moving, more violent disengaging and trusting myself more.

I would start off saying thank you for giving me the opportunity. I will do everything I can to prove I was worth picking up and will work my butt off for you.

I know one would be Scott Bostwick for sure!