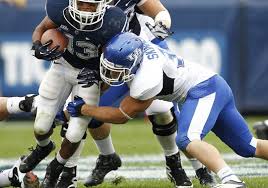 Buffalo was my only offer. Our head coach at the time saw me at a wrestling meet and I received a late offer.

It chose me ! It was either Buffalo or stay at home on the couch

My mom is my role model. She always has been. I owe everything I have to her.

I’ve yet to meet with any.

Not in college. I played FB and TE some in high school but I’ve been a middle linebacker my whole life.

I think once you get to a certain level the biggest separation is mental. Especially at middle linebacker. Who wants it more, instincts, focus, etc.

I try to look for every advantage I can in the film room. Everybody has a tendency. Some RBs only carry the ball in their right hand. A lot of O lineman tip you off when they are pulling or pass setting. Coach Tepper really trained us well in looking for things like that. 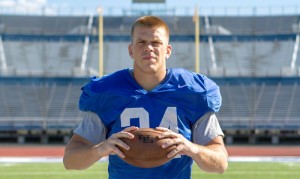 That’s really hard for me to say. Those are some of the best athletes in the world in my opinion. I always idolized guys like Ray Lewis and Brian Urlacher. Those guys make everyone around them better.

When I was in 4th grade we moved to Germany for a year. I went to an all German school, had to learn the language and I got lost on the subway downtown there.

This year I really stressed being mentally prepared. The night before a game I use to write down every positive thing I wanted to see happened in past-tense like I had already done it. I would read over that on the bus to the stadiums. It sounds crazy but visualization is powerful.

Once I get set on something that’s it.  I’m all about it.

That can get me into trouble sometimes too. It’s hard for me to let certain things/ plays go.

I’m gonna give everything I have and then some.

Ray Lewis has always been my favorite player. Growing up the Ravens and the Baltimore defense were my favorite.