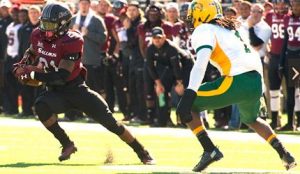 Originally I committed to Central Michigan, but when Butch Jones left for Cincinnati I began to talk to other schools. Because it was late in the recruiting process a lot of schools had filled their scholarship allotment and central Michigan pulled my offer. SIU was the only school that stuck with me.

My parents, no matter what they give me unconditional love and support on the field and off. They motivate me constantly to better myself. Of my 4 years at SIU they’ve probably only missed about 2 or 3 games. They show me everyday how to work hard, have faith, live, and love. I couldn’t of been blessed with better people and parents in my life.

I haven’t met with any scouts yet.

Growing up I played basketball, baseball, and I ran track

I played RB in high school and my freshman year in college before being switched to slot my sophomore year. I also KR and PR.

My speed and quickness in and out of my breaks, my run after the catch ability, my releases and my versatility on the offensive side of the ball.

I would compare myself to Eddie Royal and Tavon Austin. I just think we play the game a lot alike. I craft my game after them.

My whole life I’ve been told I wasn’t big enough or I was too small. And my whole life I’ve proven that size doesn’t matter. I worked my tail off in high school as well as college to prove that I belong, and I plan on doing the same at the next level. There will always be doubters and it’s my job to prove them wrong.

My biggest strength is my speed, quickness, versatility and footwork.

My biggest weakness is size.

I would tell you that I’m the type of guy that doesn’t need much motivation; I’ll be the first guy in the facilities and the last one out. I’m very versatile and I can play multiple positions on the field. I’m a team player and I’ll do what it takes for the team to win. I work hard at my craft and given the opportunity I’m positive I could greatly help your organization succeed.

My favorite team growing up was Michael Vick and the Falcons, as well as Reggie Bush and the Saints.