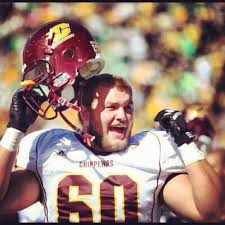 I fell in love with the school and community when I took an unofficial visit. I could tell that the University and community had a passion for CMU football. CMU was also coming off a season in which they finished in the top 25 with players like Antonio Brown and Dan LeFevour. I saw that they had built a championship culture and I wanted to be a part of that culture.

My role models are my parents. My parents have always been there for me. Even throughout college they never missed a single one of my games. I have seen them both work extremely hard in order to provide for my two brothers and me. They instilled a work ethic in me that I take with me everywhere I go. They were the ones that taught me that nothing is ever handed to anyone and that everything I want in life must be earned through hard work. For that, they are my role models. 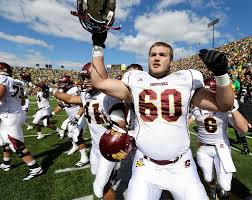 I played football basketball and baseball growing up.

In college I only played offensive line. In high school I was a tight end and a defensive end.

When watching film on opponents I always try to find tendencies. Most defensive linemen have certain moves they like to go to in certain situations. I like to find what those tendencies are and master them so I am fully prepared when it comes game time. When watching film on myself I look for mistakes. Whether it be in my footwork or assignment I always try to figure out my mistakes so I don’t make them again. I also watch to learn from other people’s mistakes to make sure I don’t make those mistakes.

The toughest player I ever faced was Leterrius Walton. He was D-lineman on our team at Central Michigan. In my opinion he is one of the best linemen in the country. Every day and every play he brought it at practice.

I wouldn’t compare my self to any one player in the NFL but I try to model my game after Joe Staley and Jason Peters. Joe Staley is a CMU alum and one of the best tackles in the NFL. His footwork and timing are some of the things I like to watch and apply to my game. Jason Peters is one of the best tackles in the game as well. He has quick feet and stuns defenders with his quickness. I like to apply some of his tactics to my game as well.

I don’t do anything in particular. I just like to relax and be around the guys on the team. I like to stay calm.

My biggest strength is my footwork and my speed. I believe I have good, fast feet that I use to my advantage in games.

My biggest weakness is also my speed. Sometimes I find myself getting to spots to fast in games causing me to get beat.

I have a passion for the game unmatched and my knowledge and athleticism would add great value.

Brian Urlacher and the Chicago Bears.