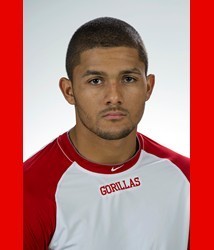 I chose Pittsburg State because of its location, tradition, and the importance of football to the community.

Coach Fui, one of my high school football coaches and teachers, is my role model. I look up to Coach Fui because he has taken me under his wing and showed me through his actions of how to be a man, a follower of Christ, and a good person. He didn’t allow his circumstances growing up to hinder things he’s wanted to accomplish in life. He grew up poor, in a family that had gang affiliations and now he is a principal at Blue Springs High School, working on earning his PhD.

I’ve met with a few scouts throughout the season. We didn’t really speak about my chances of playing in the league. The only real consensus I’ve gotten from a few teams is that they like that I play fast and play with a motor.

I played baseball and ran track in high school.

I was recruited as a receiver coming out of high school. I made the switch over to defense my true freshman year at KU.

What separates me from others at my position is that I am a very intelligent player, rarely out of position, tackle well, and play fast & physical.

When breaking down film on opponents first and foremost I look for tendencies. What are we going to get on this down and distance. Who are there go to guys. Certain formations present certain plays. Things like that is what i look for.

I would compare myself to TJ Ward for the Denver Broncos. Our style of play is very similar.

My biggest obstacle I had to overcome was when KU denied me releases to transfer and them ultimately releasing me from the team. I ended up going back home to take some classes at a local community college and working while I sought out options to get into another school so I could play football.

My biggest strength is my intelligence on the field.

My biggest weakness playing at a small college.

I would tell a GM that all I am looking for is an opportunity to prove I can play football on Sundays with the best athletes in the world. I have and will continuously work to improve my play as a player, ultimately becoming a better player so I can contribute to an organization. I love this game and willing to take the necessary steps to be on an NFL roster. Let me show you what I can do.

My favorite player growing up would probably be Randy Moss or Jerome Bettis and my favorite NFL team is the Kansas City Chiefs.

Three people I would have dinner with if I could would be Kid Cudi (Scott Mescudi), Denzel Washington, and Will Smith.