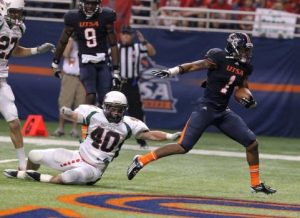 University of Texas at San Antonio

Not too many, my main ones were Virginia, Sam Houston State, and UTSA

I chose my school because it was closer to home, and it was a start up program. I knew that we could build our own legacy from the ground up.

My role model is my father, because he’s very successful, and has taught me everything I know.

I play basketball, baseball, and track.

Yes, I played QB and DB in High School, but at UTSA I played WR, and kick returner, and lined up in the wildcat sometimes, and at running back.

I think what separates me from other WR’s is that I am very versatile being on that I played a lot of other positions, and I can line up anywhere whether it’s in the slot, or outside.

How a defender is lining up against me, their weaknesses, and how to attack them.

My biggest would have to be when I broke my Tibia, I over came it by grinding, and putting in the work to get back to where I was when I was 100%.

Yes, my pregame ritual I always play I Told Y’all by Lil’ Wayne, and then draw a X in the end zone during warm ups.

My biggest strength would be making people miss

I would tell you that you are getting a hard working, and very versatile player, that hates losing and will put it all on the line to for this team. A great role model player, and that a lot of people look up too. A player that will be a positive influence to the team, and he will not have to worry about off the field issues.

Randy Moss, and the Cowboys.