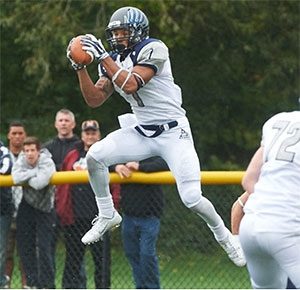 My name is Justin Thomas Bernard and I am from Cambridge, MA

I chose Saint Anselm after de-committing from Marist for a the opportunity to play offense and in Coach Murphy’s great system.

My role models growing up were both my parents because they set the standards and expectations in life. Without then I wouldn’t have understood the importance of doing the right thing in life.

I have met several scouts during practices and a Jr. pro day.

What I believe separates me from others at my position is the fight in me. since high school I’ve always been labeled the underdog. Because of this I’ll do just about anything to prove that I am not an underdog because I know that I can achieve the task at hand.

When I break down film, outside of breaking down percentages and tendencies I focus on my self. I look to fix routes and see if there was a better play to make by watching film. As a Wide receiver the pass game is science, and if you mix the wrong chemicals (mess up) it blows up in your face

As a pre game ritual I take a moment by myself after the National anthem to thank God and loved ones who have passed on.

My biggest strength is that I want to be the best at everything I do. And that I will stop at nothing to see it through

My favorite player growing up was Terry Glenn. I don’t really know why. I feel in love with the game at 2 and the patriots were my favorite team and he made plays.

If I could have dinner with 3 people dead or alive It would be both of my parents. While I eat dinner with them just about every night I’m home from school, it seem this question hints at a special dinner and they deserve it.