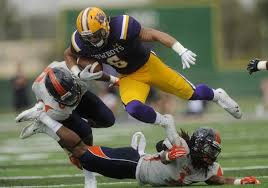 I was pretty much set that I wanted to go to SHSU so I hadn’t returned any calls I had received from Hardin-Simmons. A friend and old teammate of mine that was a couple years older than me was at HSU at the time and called me one day and convinced me to come up to Abilene to hang out for a day. Hardin-Simmons completely surprised me and was much more than I expected. I met with the coaches and some of the players there and I was really impressed with the high level of talent they had as well as the atmosphere throughout the program. Everyone, including the coaches, were extremely close. I took one last visit the next weekend to SHSU and it went great, but I called and committed to HSU on the way home.

I’m from Waco, TX. I played at Midway High School

My biggest role model is my dad. He has always been the one I have looked up to and that still hasn’t changed. With everything I do I have him in mind. Not only is he my father, but he is one of my best friends.

Not really. I have had one scout talk to me after the D3 Senior Classic game in December but it was very brief.

I played year round baseball for almost my whole childhood. I didn’t start playing football until the 6th grade, but by my junior year in high school I had decided to focus only on football. I also ran track.

I was a RB and OLB when I was younger but since high school I have played slot and returned punts.

My work ethic and my leadership ability separate me from others off the field as well as on the field. Playing receiver, I take a lot of pride in my physicality with and without the ball in my hands as well as my ability to use my quickness and speed to make plays. As a punt returner my ability to make catches and break tackles in close quarters sets me apart from others as well as being very dependable with ball security and my decisions. Overall I am not a player that is one dimensional or only exceptional in a couple areas. I have good speed and quickness as well as strength and smarts.

When breaking down film I look first at the coverages that certain team runs and then how they like to run them. Do they have guys that give away specific rolls? How do their linebackers drop in zone. Are they heavy collision players, and if so, do they like to lock and run or just try to get a hand on you? A big thing I look for is how players approach different plays. How aggressive are they when reading run? What is their favorite way to take on blocks? In coverage, do they tend to flip their hips early and keep space or late and get hands-on? Those are some of the things I watch for when preparing each week.

Lucky for me the toughest guys I have faced in college have been on my own team. That might have been because they knew me well or just because I had to face them daily, but I am extremely thankful for them because it made me a much better player. Jonathan Petty was our strong safety my freshman through junior years and he was extremely patient and was a heavy collision type of player, not to mention one of the smartest guys on defense. He made it extremely hard running routes in the slot when doing our crossover periods and that made it much easier in games and even more so the older I got.

I love watching Julian Edelman as well as Wes Welker. The size similarity to me is part of the reason I compare myself to them and like watching them, but the way they move on the field I’d like to think is very similar to the way I play. They are both extremely smart and very crisp with their route running and have the ability to be very physical despite being undersized.

I would have to say the toughest time I have had to go through was during my junior year at HSU on November 10th when my teammate and good friend was killed. It was extremely hard on our team as well as the whole school. “Overcoming” I don’t think would be the appropriate term for that because it will always hurt, but being with each other was where we found comfort and remembering the way he approached his life has definitely impacted the way that I go about my everyday life.

If it was available I always got in the hot tub for about ten minutes and then typically always went out for a warm-up by myself on the field followed by catching a few balls from the quarterbacks. After that I go in and get dressed and listen to music for a little bit until its time to strap up. Right before every game I say a quick prayer and make sure I thank God for all He does for me and the opportunities He gives me.

My biggest strength is my mind. I think I am very strong in a lot of other areas, but I think my mental strength and toughness is my biggest asset.

My biggest weakness is my tendency to forget to let loose every once in a while. If I’m not careful I can tend to be the guy that is always thinking of what needs to be done and be all business. While that is very important I have realized as I have gotten older it is important to know when and how to relax a little and have fun especially in a leadership role. I have gotten much better in the past year or so with that, but it is still something I have to continually work on.

I refuse to be anything but uncommon. It’s the way I was raised. I am the most dependable person you will know and I will give nothing less than everything I have in whatever I am doing. These things apply to all areas of my life, not just the football field.

I never had a specific team that was my favorite growing up. I was a fan of players. When I was young I really liked Mike Alstott. My favorite player now for the past couple years is Julian Edelman.