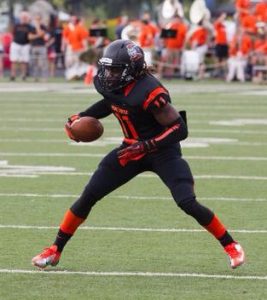 I didn’t have any offers in high school. University of Cincinnati, Saint Joseph College and a few division 3 teams were recruiting me.

The coaches made my visit feel like I was at home. They made me feel very comfortable. The passion and effort they give is incredible.

My role model would have to be my mother. She’s the strongest person I know, mentally and physically.

I met with two NFL scouts last spring during my junior pro day.

I played basketball, baseball, and soccer.

I played running back up until my sophomore year in high school, even a little bit of cornerback. Now I play WR.

I think my knowledge of my opponents defensive is what separates me. I prepare very hard to understand coverage’s and certain tendencies. My goal everyday is to never let someone grind harder than me. What also separates me from other at my position is my passion, competitiveness, effort, and my ability to separate from defenders.

When breaking down film, I look for weaknesses in their secondary. Things like do they get to their zones fast, do they play press coverage a lot, who is their worst man in coverage. I also look for which corners and safety’s I will be going one on one against to try to find his individual tendencies and figure out a way to win the battle. 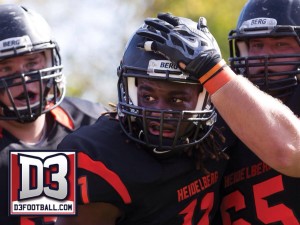 I would compare myself to TY Hilton because I feel that him and me share the same ability to get off the line and have the explosiveness to make plays. We both have similar build, good ball skills, and can play both inside and outside.

The biggest obstacle in my life that I had to overcome was October 8,2010. That day during a football game, I tore my ACL, MCL and meniscus. I thought my football carrier was done. During those eight months of rehab, I had enough time to focus and fight for the chance to play football again. It wasn’t easy to overcome an injury like this but hard work, dedication and prayer helped my get through it.

I have a couple. I eat McDonalds the night before each game. It was something I just picked up in high school. Before I warm up pre-game, I say a prayer by the goal post.

I think my athleticism and speed are my biggest strength. I don’t go down on first contact and I feel that I can win any one-on-one battle.

An area that I think every receiver can improve in is blocking.

I am very passionate about this game. Its something I take very seriously in my life. I am always willing to contribute to the team in anyway possible, even if its catching passes on practice squad to special teams. I’ll do what ever it takes to help my team win and succeed. I am a great team player with leadership qualities.

Cris Carter, Marshall Faulk and Chad Johnson were my favorite players growing up. My favorite team was the New England Patriots.