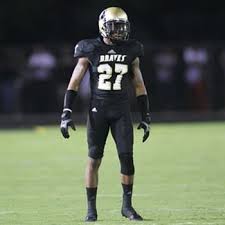 The University of North Carolina at Pembroke

Not many I got hurt my junior year of high school so I was really only getting recruited by a lot of D3 teams.

A guy that I played with in high school played at Pembroke and he kinda got me on board and talked to me about the program and it wasn’t to far from home so my family could make it to every game.

Who is your role model, and why?
My dad is my role model because he served our country in the Army and growing up he always made sure that his kids were taken care of before anything and he has always been there for me throughout my career.
Have any scouts met with you yet, and if so what are they saying?
No I haven’t met with any scouts at this time. I just signed with an agent so maybe now I will get a chance to speak with a couple.
Did you play any other sports growing up?
Yes, I played baseball, basketball, and Track and Field.
Did you play any other positions in football?
In high school I played receiver  and Quarterback.
At your position, what separates you from others?
I think what separates me is my footwork, my ability to read a quarterback when playing zone and my ability to track the ball in the air.

When you are breaking down film, what do you look for?
I mainly look for tendencies by receivers as far as what routes they run the best and which routes are most successful and  also I like to study the quarterbacks first read in certain formations.
Who was the toughest player you ever faced?
In high school I played against Keenan Allen. As far as college my toughest match-up Would probably be against Giants receiver  Corey Washington.
If you could compare your play to one player in the NFL who would it be and why?
I would have to say Sam Shields because he’s not the biggest corner but he has great footwork and he really attacks the ball when it is in the air.
What was the biggest obstacle in your life you had to overcome, and how did you overcome it?
My biggest obstacle would have to be just always being one of the smaller guys on the team and people always doubting me but I overcame it by simply showing people how talented I really am.
Do you have any pre-game rituals?
Before every game I dress up Shirt and tie even if it’s not required, and I have to listen to Lil Wayne right before I go on the field.
What is your biggest strength?
My biggest strength would have to be my footwork.
What is your biggest weakness?
My biggest weakness would have to be my size which I have dealt with my entire career but it has never held me back.
If I were a GM and gave you a second to sell yourself, what would you say?
I would say that if you were to pick me up you would be getting a very coachable young man a guy that gives it his all every time on the field and a guy that when challenged will never back down.
Who was your favorite player and NFL team growing up?
My favorite team is The New England Patriots and favorite player was Mike Vick.
If you could have dinner with three people dead or alive, who would you choose?
I would choose Deion Sanders, President Obama and Kevin Hart.
Related TopicsDominique BridgesDominique Bridges 2015Dominique Bridges nfl draft 2015Dominique Bridges nfl draft newsDominique Bridges nfl draft prospectunc pembroke Dominique Bridges